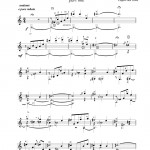 A composition consisting of four parts for guitar solo. Each part is written in a contemporary idiom. The book includes a CD which gives an impression of how the pieces might sound.

This piece has been recorded by Eugène den Hoed on Iduna CD ‘Music for Guitar’ volume 7  MSTP 9672.

1 review for Metamorphoses for guitar + CD

You must be <a href="http://www.eugenedenhoed.nl/mijn-account/?lang=en">logged in</a> to post a review.