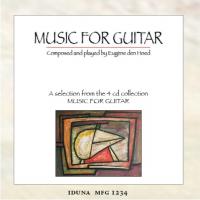 ‘Serenade; A Train in the Distance; Another Evocation; The Candy Store; Sentimental Strings; Cameleon Blues; Divertimento; Praeludium, Theme and four Variations; Evocations Nos. 1, 2, 9 and 8; A Fancy; Story Without Words; The Naughty Clown; Tropical Delight; Some Small Hours; Fantasia nos. 4 and 5. JOSEPH BODIN de BOlSMOTIER, from ‘music for two guitars’: Sauteuse; Air; Rondeau. The published works which I have encountered through reviewing editions by this Dutch composer have usually been met with approval and satisfaction. According to the sleeve notes to this privately released album, Eugène den Hoed has recorded his complete output for sologuitar on four discs, and this CD under review contains a selection -27 tracks in all – from the other four recordings; a ‘sampler’ if you like. Listed as ‘bonus’ tracks are three duets (performed with Maxim Slock) by the French Baroque composer JOSEPH BODIN de BOISMORTIER. Although the music on the album is of a good standard, the CD is more likely to appeal to anyone studying den Hoed’s music rather than a disc to have on in the car or as background music etc. The obvious appeal here is to hear the composer playing the music as intended and to this purpose I can recommend this recording. Steve Marsh – Classical Guitar, september 2008