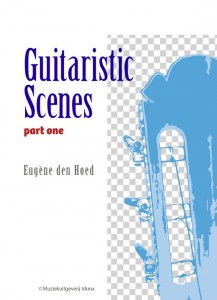 The music of this composer is always interesting, engrossing and wonderfully written for the guitar. This book is no exception and consists of eleven pieces of modest difficulty and is sub-titled ‘impressions for guitar in different styles’.

His eclectic music heralds, no doubt, from the fact that he has been immersed in both popular and classical all his life and the crossover crossover effect of much of his music is surely the result.

It begins with Malaya, in a mixture of 6/8 and 9/8 with an open, almost modal sound that is almost impossible to describe. The music effortless-ly moves around, occasionally reminding one of folk guitarists and their music. Small Talk follows with a melody that stays with you and a certain flow that is a result of the wonderful guitar writing he achieves. A Minor Blue is lots of fun and is (obvi ously) bluesy in character but not to the extent that it is a 12-bar, being more the overall feel of the piece that creates the sound of the blues, whilst Dolly’s Waltz is delightfully bizarre, with its reliance on intervals of a second, to mimic the static or wooden doll trying to dance a waltz.

Every one of the eleven pieces is really worth playing. I have a number of books from this composer and I have yet to find a dud in any of them. Great stuff!