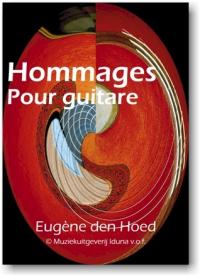 HOMMAGES POUR GUITARE for solo guitar by Eugène den Hoed Muziekuitgeverij lduna VOF 28pp. Here are nine contemporary pieces for solo gultar composed by a guitarist who, as well as studying classical guitar, also has strong connections with pop and blues bands (e.g. the instrumental progressive rock group of the 70s, Bonfire). Each composition in this album pays its own tribute to some of the best-known composers which should be recognisable to most classical guitarists. Hence there are homages to Bach, Sor, Rodrigo, Ponce, Giuliani, Piazzolla, Tárrega, Carlevaro and Brouwer. Most of the music has strong connections, stylistically, with the dedicatees but there are a few where this connection is a trifle tenuous and it is difficult to ‘get’ the association, but even so, all the collection are very well written and thoughtfully constructed for the guitar, with most of the notes falling neatly under the fingers. Of particular interest are the cormpositions paying tribute to Ponce and Carlevaro, the former one, a very beautiful work being in the manner of a Nocturne and the latter one a delightfully animated Sicilienne. These compositions are, without a doubt, a really valuable addition to the contemporary repertoire for the intermediate student and this is a book I will be uslng with my students. Recommended. Steve Marsh – Classical Guitar, march 2007