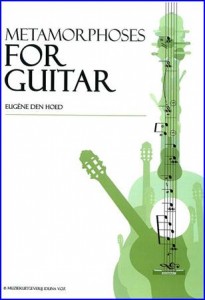 Here are, to quote its subtitle, ‘Four Movements in a moderate contemporary style for grades 4 to 5’. It begins with an andante e poco rubato declamatory phrase, destined to return later. It is set around a centre of E, whilst not actually being in E minor, if you understand me, although at times it feels like E minor. The part-writing style enables the composer to flow through some rather unusual ideas whilst still feeling admirably suited to the guitar. The first movement is generally in three voices.

Part Two is a piu mosso and the chromatic nature of much of the material makes it seem almost like a veriation of Part One, which I am almost convinced it is! Again this is largely in three voices. The hardest movement is Part Three, marked again, piu mosso but this time exhibiting much more complexity in its thythms. A sudden slowing down leads to the opening movement’s declamatory motto theme before an attacca instruction leads one into the final Part Four, where the first slow section marked lento ma non troppo occurs. This however soon leads to a Dal Segno, taking one back to the beginning of Part Three for another turn around the hardest section, before a trip to the coda, where one is met by the motto once more. A final thrusting flourish from Part Three and the work closes on an altered E minor chord.

This is always very playable, if at times unusual, in its harmonic structures but nevertheless always understandable and involving. This is a more than interesting work that shows how versatily this composer is and just how good his back catalogue is. If you do not know of this man’s writings, have a look at his publisher’s website at www.iduna-deurne.nl and take a chance on some – they are well worth the effort.