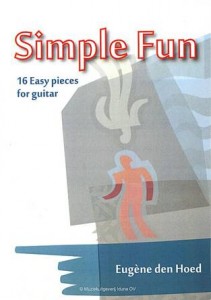 This little set is aimed right at Grades 2/3 and show of Eugene Den Hoed’s fine ability to write interesting music mostly in the first position. There are no tempo markings, as he prefers to leave that to the player’s own taste and technical abilities.

The pieces themselves are varied, melodic, and often with a tinge of modernity, just to remind you that this is contemporary music. They are printed in increasing difficulty with the opening few pieces mostly in two or three voices at the most and the final two or three involving some chords and slightly more densely written harmonies.

That said, they are all eminently suited to the pupil who wants to try something a little different but not too much so, and as such I can heartily recommend this fine book as definitely one to hunt out.