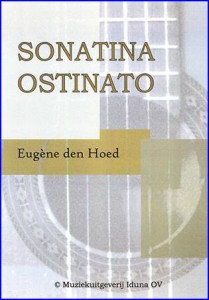 Eugene den Hoed teached at the Centrum voor de Kunsten in Bergen op Zoom-Holland and his past studies have included ones with with South American guitarist Baltazar Benitez. As well as studying classical guitar, he also has had strong connections with rock bands (e.g. the instrumental progressive rock group of the 70s. Bonfire) and has had a large number of original compositions and arrangements published by Muziekuitgeverij Iduna.

Over the past few years I seem to have reviewed a number of editions of music written by Eugène den Hoed and as far I can recollect I have never been disappointed by his music.

Sonatina Ostinato is a three-part work written in a contemporary fashion and dedicated to Leo Brouwer. The opening movement, an Allegro, is the obvious influence of the composition’s overall title, with its forward thrust of the ever-moving syncopated melodic line and with its mildly caustic edge to it creating tension almost all the way through: quite an exciting beginning to the work.

A sense of serenity comes with the tranquil second movement; a short episode illustrating how to compose economically for the instrument and still retain musical interest. The animated finale brings the work to a stimulating conclusion with rapid scales and arpeggios leaping around the first twelve frets of the fingerboard to dramatic effect with just a brief few moments of serenity in the form of an Interlude mid-way through.

Looking at the score, one might be forgiven for thinking that this work is much more technically difficulty than it actually is. I remember reading several years ago that Eugene den Hoed had the commendable ambition to write contemporary music aimed specifically at the Intermediate player. As this piece would be suitable for any Grade 6 player seeking to extend their repertoire into the world of ‘modem’ music it seems that he is realis¬ing his ambition.

Altogether a most satisfying and welcome new addition to the repertoire.