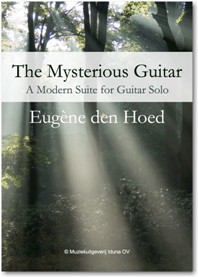 The Dutch guitarist Eugene den Hoed (once a member of the symphonic popgroup ‘Bonfire’) is a prolific composer of guitar music and, according to what little knowledge I can gleam from a small bit of research, has the admirable ambition to write contemporary music aimed specifically at the intermediate player. From the evidence of this new edition under review and several others reviewed recently, he is achieving this project in quite a successful manner. The Mysterious Guitar is subtitled A Modern Suite for Guitar and has altogether nine movements. Each movement has a descriptive title and most of them to the expectations conjured by the name, hence The Woods So Dark has an ominous presence: The Stratosphere gives an ‘other-worldly’ impression; Mysterious Journey is… just that (shades of the Swiss composer, Frank Martin in this movement) and so on. Eugène den Hoed obtains many of the effects by utilising one of the guitar’s most useful features, the campanella: this overlapping of notes seems a particular characteristic of this composer and one he uses to good effect. As stated earlier, Eugène den Hoed has recently set out to compose student guitar pieces in a ‘modern’ mode without becoming too avant-garde and with The Mysterious Guitar suite he has produced an attractive, interesting, stylish and relatively sizeable piece. For any student of around the Grades 5-6 mark wanting to try something substantial and musically adventurous, this is well worth considering. Steve Marsh Classical Guitar, october 2008