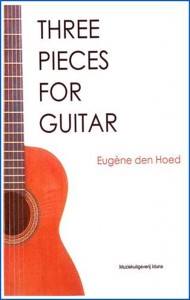 This composer can always be relied upon to write beautifully structured music with a penchant for the individual harmony and the completely unexpected melody, whilst keeping the player occupied and engrossed throughout. This latest work is no exception.

The first movement is a Danza Nova set in a mixture of 9/8 and 6/8. After a repeated octave B leading to a brief introductory statement, the piece begins for real with a musical idea based around a succession of three-note chords, (B, G and A7) that sound on paper as if they shouldn’t go together well, but they do. Everything begins mostly in qua-vers, although the difficulty factor goes up a step or two with the lightning-fast semiquaver runs that enter shortly afterwards, although they fit well under the hands. After a return to the opening three-chord idea a new light airy theme emerges on the top strings before a final return of the opening Idea and its semiquaver companion before a final coda consisting of a bass note flourish and a glissando chord.

Moments of Dissonance is exactly that namely a piece in mainly two voices which at times almost accidentally clash with a momentary dissonance before moving on. There is a large central section of long held chords that provide a welcome oasis from the opening idea that eventually returns only to make way for a sudden passage involving sextuplet semiquaver chords, before a return to the opening sections and a coda that leaves one deliberately in the air.

The final Asturioso references the Albeniz Asturias with quickly moving arpeggios under-pinned by a moving bass melody. After a Consider- I able time, a slower more relaxed middle idea enters marked Con Calma before a varied return to the initial arpeggio idea leads to a sudden quiet patch where the music slows down and the whole work ends in quiet harmonies. Always interesting to play and never predictable. this latest work is quite challenging technically but like so many of his other works, well worth getting your hands around.